Where are the skeletons of all the REALLY old people? Archaeology vs the Bible.

There is scant evidence for very old people in the archaeological record, but the Bible claims people once lived for centuries. Is this a major contradiction? Not really. First, regarding the physical evidence, we would not necessarily know what to look for. Second, just because a person can get old does not mean they will. Potential lifespan is not the same as realized lifespan. Third, and this is the focus of this episode, population modeling shows that short-lived people that are the maximum number of generations removed from Noah will quickly dominate. This is a recipe for rapidly collapsing lifespans. Long-lived people would have been quite rare in the early post-Flood world.

The biblical data. See my article The rapid decline in biblical lifespans: 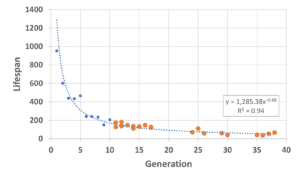 The actuarial table I used. Data from https://www.who.int/healthinfo/paper09.pdf, WHO LIFE TABLE FOR 1999: AFR D 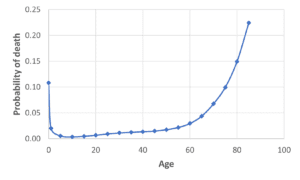 A population pyramid at year 1000 using the default model: 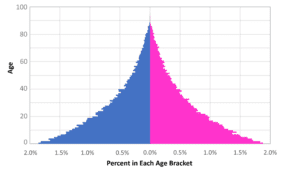 The number of generations people are ‘removed’ from Noah at 100-year intervals in the default model: 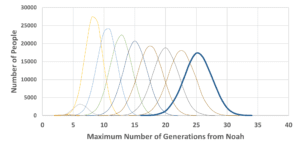 Realized vs expected lifespans at 100-year intervals in the default model: 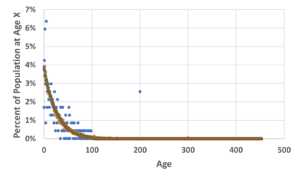 Love the content? You can help support this site by buying Dr. C a coffee!

Or, become a monthly patron, with perks! Join me on Patreon to access exclusive and early content.

Or, click here to become a monthly patron, with perks!

← Genealogy vs Phylogeny: The War Continues Things I no longer believe →

Biblicalgenetics.com is for anyone interested in exploring the deeper aspects of human history, but a history informed by the Bible.

The views, thoughts, and opinions expressed on biblicalgenetics.com do not necessarily reflect those of Creation Ministries International, Inc. (Dr. C's main employer), or any other entity.